A PORTAL THROUGH WHICH WE ACCESS THE PROFOUND EXPANSIONS OF LIFE

​
Sri Sudarshan is the name given by our revered Guru, H. H. Swami Jyotirmayananda, for for Sri, meaning divine virtues and Sudarshan, for remover of blindness (ignorance) and bestower of true vision (knowledge) by the power of self-effort through divine grace. Having sought and found what is real peace, health and enlightenment within his own nature, Sri Sudarshan is an active leader in the community, exemplifies high-vibrational living and uplifts humanity with his joyous wisdom!
SCHEDULE A MEETING 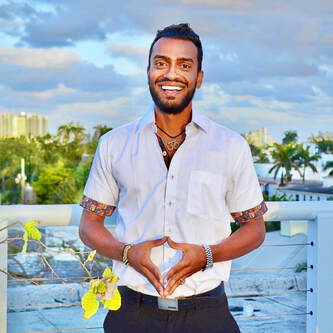 Sri Sudarshan [Sujal H. V. Patel] has for lifetimes been exploring health, happiness and real satisfaction in the human experience. Being curious about the interconnection of universal nature, individual personality and their ideal balance, Sujal started practicing Yoga consistently before it rose to popularity in the West and became widely known for its postures, breathing and meditation. In his very first experience, Yoga revealed its infinitely positive outcomes to Sujal in a moment of pure divine revelation. Sujal's body became completely quiet, his mind became absolutely calm, so that the Voice of Truth was heard, and it said:

Sujal began teaching Yoga at M.B. Patel Higher Secondary and Secondary School in Gandhinagar, Gujarat, India, while following the same footsteps of his widely adored great-grandfather, Purushottamdas “Daskaka” Patel, Member of the Indian Parliament, pioneer of education, national reformer and founder of the campus. Sujal completed his International Bachelor of Arts degree from the Indiana University - Bloomington, writing treatises on Gandhian Economics, Eastern and Western Religions, Global Sustainability, and the Ethnography of Yoga, as expressions of his interest in personal, professional and civil leadership. Sujal is licensed and certified to teach Yoga by the Sivananda Yoga Vedanta Forest Academy in Madurai, Tamil Nadu, India. Yoga continued to evolve him on the path of Self-Realization. With the development of auspicious aspiration for the sublime knowledge of Yoga's unbroken lineages, Sujal felt the clear message to give his life to the mission of teaching Yoga and studying under the Yoga Masters who have preserved this undeniable gift by their shining example. Now it was Sudarshan who accepted the title of Yoga Siromani, The Jewel of the Crown of Yoga, and committed his life to Dharma, upholding truth, virtue and purity.

Sri Sudarshan lives with the purpose of his name "remover of blindness and ignorance and bestower of true vision, by the power of divine grace through self-effort." A formally-initiated direct disciple of two of the world's most illustrious spiritual masters, Sri Sudarshan studies and teaches Yoga for attaining the Goal of Life by the direct guidance of venerable Guru, His Holiness Pujyatman Sri Swami Jyotirmayananda, the Enlightened Sage, Living Saint, referred to as "Genius of Yoga," and now presiding at the Yoga Research Foundation in Miami, FL, U.S.A. Sri Sudarshan's beloved Gurudev is the highly-revered and last-remaining direct disciple of one of the world's preeminent spiritual masters, Sri Swami Sivananda Saraswati of the Divine Life Society. Sri Sudarshan also received the direct initiation from Sri Swami Rajarshi Muni, at the Lakulish Yoga University in Ahmedabad, Gujarat, India. Their lives embody all of Yoga's teachings.

​"Realize that you are the sky in the light of wisdom!​"

Sri Sudarshan reminds us of life’s most essential questions: “Who Am I?” “What Is My Purpose?” & “What Is My Goal?” With profound insight and clarity, Sri Sudarshan transforms the wisdom of the ancient way into simple and focused actions for the modern day. Uniting self-practice with proper understanding is the key to improving oneself, serving the world and gradually attaining Self-realization. An advanced teacher, Sri Sudarshan encourages the joyous movement toward Enlightenment through integration of action, will, emotion and reason. Sri Sudarshan is a servant of the body, mind, heart and soul of humanity.

"Truth is one, with many appearances.​"

​Sri Sudarshan leads all students, trainees and clients from beginning endurance to peak performance, by developing their self-confidence and poise, and by showing them how to unlock and harness the power of the mind and human spirit. Sri Sudarshan's inspiring teachings, steadfast commitment to Yoga and practical wisdom empowers both individuals and businesses to maximize their health and realize their goals. Sri Sudarshan is based at the SKYLIGHT YOGA Ashram in Miami Beach, Florida where he shares mystic insights into living profoundly and deeply, and provides full-time guidance, virtually and in-person, worldwide. Sri Sudarshan and SKYLIGHT YOGA's illumined teachings support the physical health, mental stability and spiritual grace of people everywhere!​​​
MAKE AN APPOINTMENT
​
​"Grace of the Universal Self is sought
​through one's own heart."
​H. H. SWAMI JYOTIRMAYANANDA