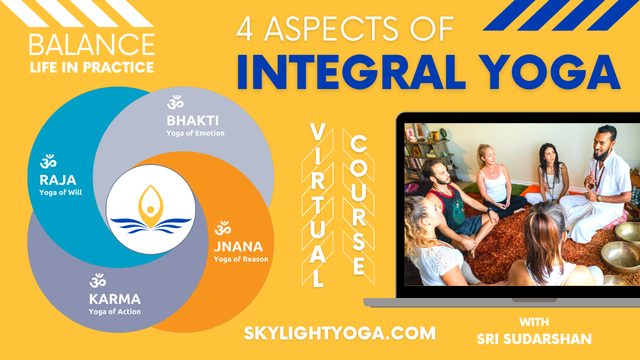 Yoga is actually Integral Yoga, meaning the all-aspected union with the Divine Self in every level of your personality. Truly and simply, the term "Integral Yoga" implies practicing Yoga in total balance and completeness.

The four main "Yogas" are – Karma Yoga, Bhakti Yoga, Jnana Yoga & Raja Yoga – all these paths lead ultimately to the same destination – Communion with Reality – and the lessons of each of them need to be integrated if true wisdom and transformation is to be attained. Gain real insight into Yoga as it was originally taught and practiced- still is to this day! Salutations to the Masters and all Yoga Sages who by their ever-living examples embody the perfection of the soul!

Every action - Karma - that is rendered as a duty towards one’s family, friends, society and the world, is in fact a process of uniting our individual consciousness with Divine Consciousness. Karma Yoga is a channel for expressing the Divinity within, and reveals in our heart the final goal of Realization.

Knowledge that purifies reason and installs the intellectual faculty on the altar of intuition is known as Jnana. When reason becomes free from the limitations that are exercised upon it by the presence of complexes, it becomes intuition. Intuitive intellect reveals the Self through the practice of Jnana Yoga.

Recognize the need for a transcendental foothold from which we may lift ourselves from the turmoils of the mind. Yoga recognizes this supreme basis verily within one’s own existence, and as the basis of existence itself; this is Bhakti Yoga - experiencing infinite sweetness of existence.

Raja Yoga enables the mind to focus and meditate, until human consciousness rises to its essential glory. Raja Yoga is a profound study of mind and the method of unfolding its powers for attaining the transcendental realization of the Self. It gives you a deep insight into realizing any desire.